Striped and crucifer flea beetles are some of the most common insect pests in Canada, with striped flea beetles becoming increasingly more prevalent in the Prairies. In abundant populations, they can cause yield losses of about 10 per cent, even when insecticide is applied. Canola Council of Canada estimates that annual crop losses in North America could exceed $300 million each year.
Tips
6min read

Striped flea beetles can devastate a crop within 36 hours

These insects are particularly troublesome because of their dense populations and voracious appetites. Though they are more active on warm, calm days, cooler weather doesn’t stop them — their activity may be reduced, but they continue to feed. This means that crop loss can occur very quickly, with some experts estimating leaf area loss advancing from 25 to 50 per cent in a matter of one day.

Flea beetles become active during the first extended period of warm weather in the spring — usually between April and May. As you scout, you’ll be looking for damage done by adults. This is because flea beetles have one generation per year — adults will overwinter in field margins and grassy areas, then emerge in the spring to feed and mate. Offspring emerge as adults in the fall to feed before overwintering and beginning the cycle all over again.

As flea beetles are aggressive feeders that can devastate a crop in a short period, scouting early is your best defence, especially if conditions in your region favour the survival of adults.

These conditions could indicate high risk of flea beetle infestation:

Factors that increase the risk of flea beetle damage

If you are working with any of these challenges, scout fields every two days, looking for signs of flea beetle damage on field edges:

Crop damage is exacerbated when flea beetles can only feed on a few plants. When you have fewer plants, it’s more important to protect each one. Monitor fields more closely.

For most growers in Canada, seeding later in the spring isn’t necessarily a challenge: it means warmer soil and faster germination. However, we’re including this case in the list because it also means that crops emerge during warmer weather, when flea beetles are actively feeding. If you seeded later, be sure to scout often until your crops reach the four-leaf stage: once they’re past this stage and are growing a new leaf every day, they can typically out-compete flea beetles.

Crops can typically out-compete flea beetles once they're past the four-leaf stage and are growing a new leaf every day. If rain or other factors keep growers from seeding until later in the spring, the crop emerges when temperatures are warmer and flea beetles are actively feeding.

If the weather turns cold or very dry and growth stalls, or if the plants do not have good early-season vigour, they remain smaller for a longer period and are more vulnerable to flea beetle damage.

Flea beetles are less active under minimal and zero-till conditions. The thatch left by the crop stubble is cool, shaded and more difficult for the beetles to navigate. In conventional tillage systems, flea beetles are more active and can cause more damage.

Spray foliar insecticide when 25% of the plant is damaged. Studies show that flea beetles don’t reduce crop yield until 25% damage. 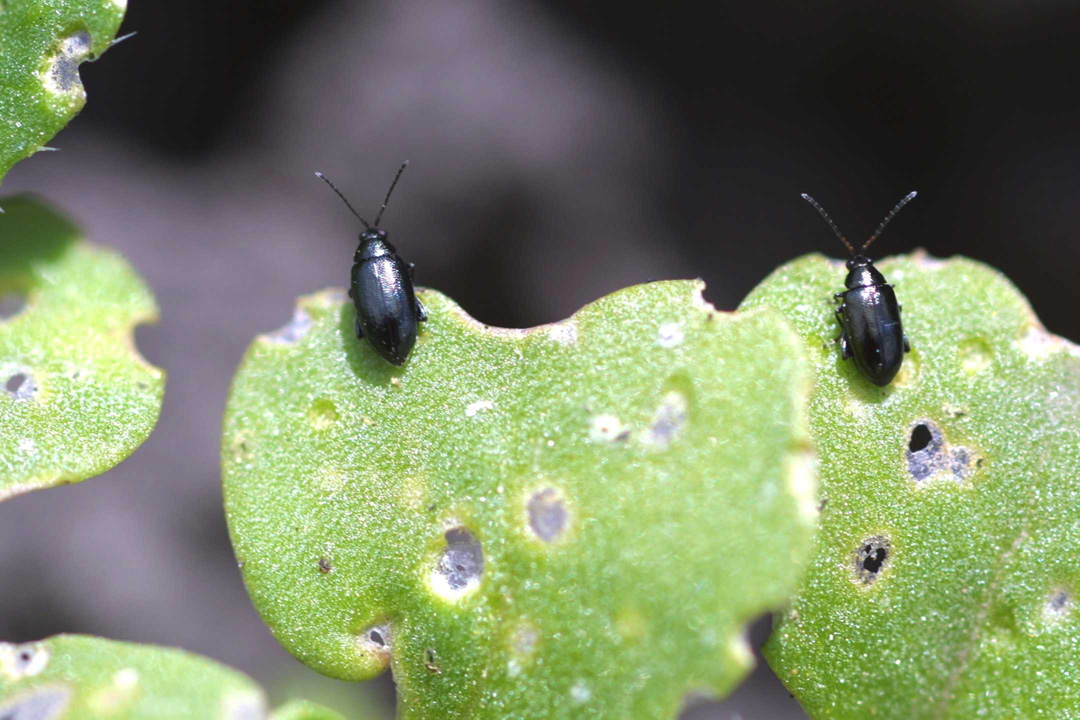 When necessary, apply a foliar insecticide like SILENCER® 120 EC. This Lambda-cyhalothrin insecticide is registered for use in canola, wheat, barley, oats and many other crops. For convenience, canola growers can tank mix Silencer with glyphosate, Liberty® or Odyssey®.

For best results, be sure that flea beetles are active when spraying, but avoid doing so in the heat of the day.

A study by the University of North Dakota found that when flea beetle pressure is high, delaying the foliar application by even one or two days could result in the loss of an entire field.

It’s also important to note that seed treatments don’t provide the same level of protection they used to, and some company rebate programs don’t support other insecticides resprays as much as they have in the past.

With SILENCER, you know you’re getting a reliable product with no hoops to jump through and no programs to manage.

Don’t get caught without protection, make sure you have your SILENCER this season.

For more information, check out these resources:

“Pre-seed Vs. Post-harvest: How to get the best perennial weed control”